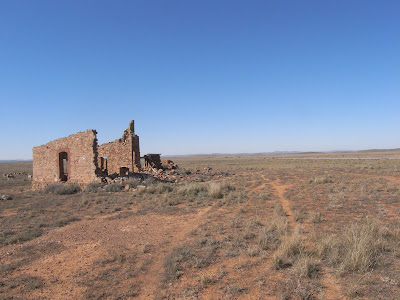 Out there, where the country is flat,
Where the sky is cloudless blue or star-littered black,
Where trees huddle in the dry and rocky creeks,
Where the grey salt bush sparsely grows,
Where on the far horizon the knuckled lumps of the Flinders Ranges
Rise in their stark, austere, rugged beauty,
In that place, that ageless, barren world,
A place or rock and dust and heat and drought,
Lies a ruin, a heap of stones, some bricks,
A few walls still standing, a door way,
The crumbling remains of someone’s dream
That briefly sparkled, hoped, laboured and built,
Flickered through days of cloudless sky,
Then died, hope turned to dust, dreams abandoned
And the land returned to its harsh eternity.
Posted by Neil Creighton at 17:16

Email ThisBlogThis!Share to TwitterShare to FacebookShare to Pinterest
Labels: General